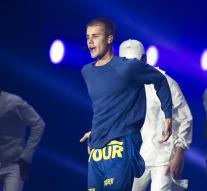 - Justin Bieber has become the second person who has 100 million followers on Twitter. The singer passed the magic border today. In order to celebrate the milestone, Twitter will shortly introduce a Bieber head emoji that appears when the hashtag # 100MBeliebers is being used.

Bieber made his account in March 2009. Since then, his name, @justinbieber, has been used in more than 2 billion tweets. The word Belieber, as Bieber's fans say, has been 84 million times up to now. Bieber himself also tweeted himself. His counter is on more than 30,000 tweets.

Katy Perry was the first to pass the limit of 100 million followers in June. Other performers on social media include Taylor Swift (85 million), Rihanna (77 million) and Lady Gaga (69 million).