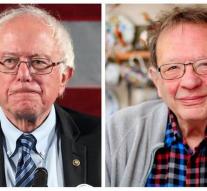 amsterdam - The midterm elections in Britain, required by the premature departure of Prime Minister David Cameron, have a special participant: Larry Sanders, the older brother of Bernie that Hillary Clinton was so difficult in the battle for the Democratic nomination in the United States.

Larry is a candidate for the Greens in Witney, where he takes on the big favorite, Robert Courts, who is running on behalf of the Conservatives.

Bernie Sanders has already expressed his support for his brother: 'I do not know much of British politics, but I do know a lot about my brother... My brother is a caring person who likes everyone sees represented in the government, not just the people at the top. '