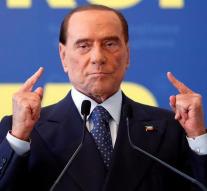 rome - Silvio Berlusconi has revealed his return to the political scene unfolding his ideas for the next year's elections. Former Italian Prime Minister (81) presented himself as a moderate pro-European at a meeting of Forza Italia on Sunday. He said the party wanted to lead successfully in the poll, presumably in March 2018, and promised substantial tax cuts as center to the right.

'We predict a big victory for the center-right,' said Berlusconi, who disappeared in 2011 by numerous scandals and litigation. Unlike his allies, the elderly billionaire, who looked fit, showed no Eurosceptician. He wants no less but more Europe and advocated a common defense, foreign, industrial and fiscal policy. 'I do not think we can leave the euro. '

Berlusconi, who received a new heart valve last year, can not fulfill any government function because he was convicted in 2013 for tax fraud. He hopes that the European Court of Human Rights, which bends over the case in November, will lift that ban.