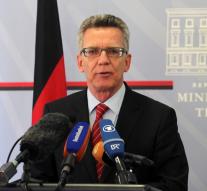 - Refugees from Syria in the future get a worse asylum status in Germany. The residence is a temporary status and family reunification is excluded, was Interior Minister Thomas de Maiziere said Friday.

" Other countries give in such situations also cover for a limited time ", he said on German radio. " And we are going to do with the Syrians in the future. We will tell them : " you get protection, but so-called subsidiary protection that is limited in time and without family reunification. "

According to the Frankfurter Allgemeine Zeitung, the new regime immediately. " The Federal Office for Migration and Refugees are instructed immediately refugees from the civil war in Syria only subsidiary protection offering ", said a ministry spokesman.