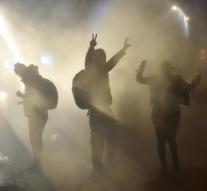 dusseldorf - After the heavy riots around the G20 summit in Hamburg, German politicians want to chart left-wing extremists across Europe. Leaders of the ruling parties have ruled according to the Rheinische Post (RP) for the special storage of leftist extremists data, as happens to right extremists.

This has to be done across Europe, the Vice-President of Social Democrats in the Federal Day, Eva Högl (SPD). 'Hundreds of violence and firefighters are without a problem and without being recognized from abroad traveled to Hamburg to live out there,' complained Högl's group colleague Burkhard Lischka.

Armin Schuster of the Christian Democratic CDU had a very good idea at the weekend. According to the RP Monday, Stephan Mayer of the Bavarian Christian Democrats (CSU) confirmed that 'a European file of left extremists must come. '

'The incredible and brutal excesses of violence show in a worrying way that in Germany and many other European countries there is a very active left-extremist scene,' said Mayer. According to German media, more than four hundred arrested riders are still 225 on Monday. Most of the detainees are from Germany, but foreigners are arrested like 37 Italians and 25 French and several people from the Netherlands, Austria, Spain and Switzerland.