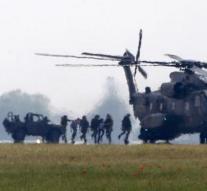 - The German government wants to recruit citizens from other EU countries for the army. That the magazine Die Welt reported Saturday. The leadership of the Bundeswehr is not warm to the idea, stating that German citizenship must remain for the army,, elementary '.

The plan is a document published by the Government on the future security policy and the future of the German army. According to Berlin makes it not only recruiting citizens from other EU countries for a wide integration,, but also a strong signal of a European perspective ''.

At present, the German citizenship is a requirement as a soldier in the Bundeswehr to get started, although the law allows for exceptions.