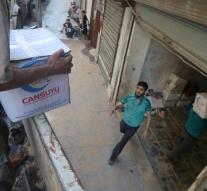 - There is an airlift required to provide the plight of Aleppo inhabitants of much-needed relief supplies. Finding that German Foreign Minister Frank-Walter Steinmeier. He points out that the Contact Group for Syria, where the main countries involved in Syria meeting, has agreed agreed that,, an airlift can be considered as humanitarian aid is routinely stopped ''.

Steinmeier argued to reinforce his argument that earlier also the inhabitants of the eastern Syrian Deir ez-Zor were helped by aid flights from the fire. The situation in the years besieged metropolis Aleppo would be even more acute.

Rebels still hold position in the east of Aleppo, government forces have virtually encircled them. Insurgents did last week to break through the lines, but the part of town that is in their hands to ask it without a safe supply route.