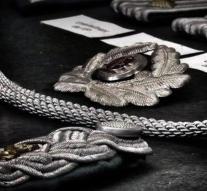 berlin - Fearless burglars struck at the Berlin police. They provided Sunday access to the main office in the Tempelhof district, where the police museum is also located.

The unknowns forced the showcases and showcases out of the way, including, among other things, signs, distinctions, Gestapo credentials, headgear and the cross of merit of a former Commissioner.

The information service confirmed that Tuesday after the newspaper Die Welt had reported the remarkable burglary and preference of the thieves. On the internet, the police responded with repentance and humor. 'We have incredible pits' was the head of confession on Facebook.

That headline was preferred above 'Warn your bones when we find the items on eBay', 'Our museum would like to return a.... His war demons' and 'How do we explain this to the outside world. 'According to the Facebook page, these suggestions did not match.