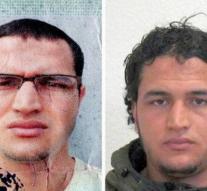 berlin - The alleged perpetrator of the attack in Berlin, Anis Amri, shortly before the massacre still a selfie sent from the cab of the truck that he used in the attack. That German media reported Wednesday.

He would have chatted with fellow believers in the truck. ' My brother, everything is fine, God willing. I'm in the car, pray for me brother, pray for me, '' was his message. Then he took a picture of himself.

Shortly thereafter Amri drove the truck to the busy Christmas market which killed eleven visitors. The truck driver he had previously slain.