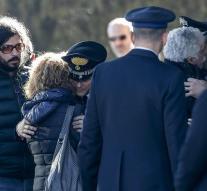 rome - The remains of the Italian woman who died Monday reduced by the attack in Berlin Saturday to Italy. The woman's body was flown from Berlin to Rome with a military plane. The device also were her parents.

At the Ciampino airport in Rome, the plane was met by, among other Italian President Sergio Mattarella and the Minister of Defense Roberta Pinotti. The woman, one of the twelve people killed by the attack on the Christmas market in the German capital, will be buried Monday.