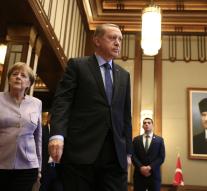 berlin - The Merkel government would prohibit Turkish Germans from speaking in Germany in a referendum on the reintroduction of the death penalty in Turkey. Spokesman Steffen Seibert said that in Berlin on Friday. 'It is politically inconceivable that we will give permission in our country for a vote on a measure that is so clearly in violation of our constitution and European values,' said Seibert.

President Recep Tayyip Erdogan promised to reintroduce the death penalty last year as the Turks wished. Recently, he said to allow the people to decide on that proposal in a separate ballot box. The parliamentary consultation on the constitutional amendment which gives him great power was a small difference in favor of Erdogan. There were numerous complaints about irregularities.