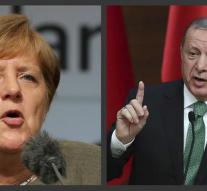 'We must prevent the Muslim communities from being affected by President Erdogan in Germany', the SPD ministers Sigmar Gabriel (Foreign Affairs) and Heiko Maas (Justice) said on the website of Der Spiegel on Tuesday.

'We need to investigate whether and how the Turkish state in Germany builds structures aimed at prosecuting opponents of the Turkish government party AKP,' said the governors.

'We need to closely monitor what values ​​and political ideas are transmitted in the mosques and organizations maintained by the Turkish state. '

A month ago decided to turn the German government of the then moderate course against the Turkish President Recep Tayyip Erdogan. Gabriel sharpened the travel advice and warned German entrepreneurs for investment in Turkey.