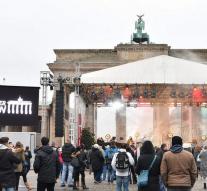 berlin - With a concert at the Brandenburg Gate in Berlin Friday commemorates the victims of the attack in the capital Monday. Under the motto 'Together Berlin' occurred several German artists at the famous port. The meeting began in the afternoon with the song We are the World.

'We want our friendship, solidarity and love does not let steal', the organizer of the memorial concert said beforehand. According to local Berliner Zeitung came on the opening 'significantly less' people than the tens of thousands of which the organization had counted on. Probably has to do that according to the newspaper with the cold. On the bill are mostly local artists, no international celebrities.

The concert is strictly protected. Surrounding the area are concrete blocks, so that vehicles can not get there, and be monitored include bags at the entrance.