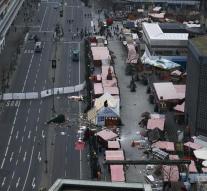 berlin - The Christmas market in Berlin, where Monday took place a bloody attack again on Thursday will open to the public. That has led the market on Breitscheidplatz published in the Memorial Church Wednesday.

All the other Christmas markets in the German capital had already opened Wednesday.

The markets closed their doors after a terrorist with a truck was swept over the crowded Christmas market at the church which twelve people were killed. The culprit is a fugitive.