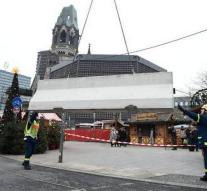 berlin - The Christmas market in Berlin, where Monday was committed to a bloody attack on Thursday opened again to the public. This happened after a brief meeting of the stallholders next to the market in the Memorial Church.

A terrorist Monday sowed death and destruction by driving on the crowded market with a truck. Twelve people were killed and nearly fifty people were injured.

Out of respect for the victims, the market will be more sober. There is no lavish lighting and there will not hear party music. The market is among other things protected by concrete blocks.

The holders of the stalls were Thursday visibly affected and some had tears in their eyes. On the square in front of the church they put candles down at a table with a picture of the market for the attack. 'We are still stunned and shocked' expressed the operator of the market sentiments.