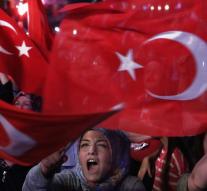 - The German government of Chancellor Angela Merkel sees the President of Turkey Recep Tayyip Erdogan as a mainstay of militant Muslim groups in the Middle East. Which according to the German broadcaster ARD confidential answers from the government on questions of the party Die Linke.

,, The numerous expressions of solidarity and support measures for the Egyptian Muslim Brotherhood, Hamas and groups of the armed Syrian opposition by the regeringsartij AKP and Erdogan underline their ideological affinity with Muslim brothers, 'the Merkel government. According to the ARD put Berlin in which to reply for the first time a direct relationship between the Turkish president and the militant Palestinian movement Hamas, which has been on the EU list of terrorist organizations state.