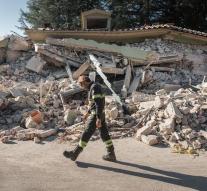 - Italian salvage workers have found three more bodies under the rubble in the devastated village Amatrice. So far had counted 290 dead, victims of the earthquake on Wednesday.

A dozen people from Amatrice are still missing, residents estimate. Three of them were found Sunday buried still lie under the rubble of Hotel Roma in the center of the hilltop village. The hotel was fully booked because of a crowded culinary festival was held in the neighborhood. The fire department removes lumps wall so rescuers can excavate the three corpses.

The rescue work in most of the affected area was stopped Friday, but in Amatrice search through them yet.


Central Italy Sunday was again hit by a strong aftershock.