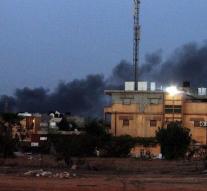 benghazi - The international airport of Benghazi has been officially reopened for commercial flights on Saturday during heavy surveillance. The airport was closed for three years because of the fierce fighting in and around the Libyan city and the chaos. The first devices that took off Benina Airport went to capital Tripoli, Amman in Jordan and to Kufra in southeastern Libya.

There are also scheduled flights to Tunis, Istanbul and Alexandria. The carriers are Libyan Airlines and Afriqiyah Airways, both state property. In the last few months there have already been a few military and freight planes.

Benina is located east of Benghazi, the second city of Libya. In the summer of 2014 there escalated the war violence when troops loyally attacked Commander Khalifa Haftar an offensive against jihadists and other enemies. Earlier this month, Haftar called out victory after his men had also cleared up the last resistance brackets in the inner city.

Passengers and airport staff were relieved Saturday at the reopening. In the past years, they had to go for a flight to Labraq, a four-hour drive by car.