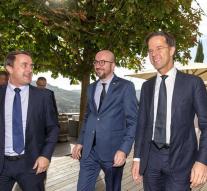 - For the first time bringing the Prime Ministers of Belgium, Netherlands and Luxembourg collectively as Benelux visiting a country outside Europe. The three prime ministers in December go to the North African Tunisia.

That was announced Monday at a meeting of the Benelux leaders in Schengen (Luxembourg). Benelux is looking into Tunisia to the possibilities for further cooperation, for example economically but also in terms of security.

Prime Minister Mark Rutte called the joint trade mission to Tunisia a proof that the UK works. In Tunisia erupted in late 2010, a revolt against the rulers of which led to a wave of protest in other countries in the region, the so-called Arab Spring.