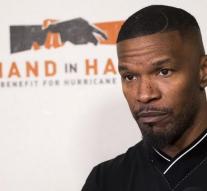 - The benefit night for Hurricane Harvey and Irma, who was held last night in the United States, has already delivered more than 44 million dollars (37 million euros). That reports ABC News. Hand in Hand Action helped a large group of Hollyster stars.

During the one-hour television broadcast, presented by Jamie Foxx, $ 14 million was collected. In the hours after that, the amount increased by donations over the phone and online to 44 million.

In the special television broadcast a series of celebrities passed, including George Clooney, Justin Bieber, Beyoncé, Leonardo DiCaprio and Hilary Duff. A number of them commented critically on climate change and global warming during a short speech.

'Everyone who believes that the earth is not warming up must be blind... or not very clever, 'said Stevie Wonder, who plays in the show Lean On Me of Bill Withers.

In addition, there were performances of Usher and Blake Shelton. They played the song Stand By Me. Despacito star Luis Fonsi sang along with singer-songwriter Tori Kelly the song Hallelujah by Leonard Cohens.

The collective action organization, held in Los Angeles, New York and Nashville, was in the hands of Scooter Braun, the manager of Ariana Grande and Justin Bieber. He was also the driving force behind the One Love Manchester Benefit Concert after the onslaught following a concert of Ariana in May.