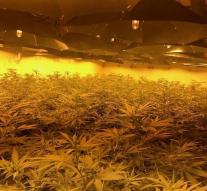 london - Three Britons were convicted on Friday for running a huge cannabis plantation in a former nuclear bunker in an isolated area in southwest England.

The gang used the bunker to grow more than 4000 cannabis plants, accounting for an annual revenue of 2 million pounds (2.2 million euros). The bunker was built in the 80's to house local government officials in the event of a nuclear attack.

The bunker, located in Chilmark near Salisbury, was no longer in possession of the Ministry of Defense. But the building was still completely intact, complete with doors that could withstand nuclear explosions, making the complex virtually impenetrable, the police said.

The nursery was presumably in operation since 2013. In order to function, the gang circumvented the internal power supply and instead lost power through a facility outside the complex, using illegally for 650,000 pounds of electricity.

The three suspects were sentenced to eight years' imprisonment and two to five years.