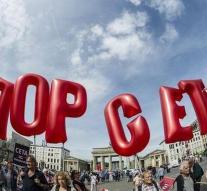 brussels - Belgium wants to know from the European Court of Justice whether the trade agreement between the EU and Canada (CETA) does not violate European treaties. In particular, it wants a judgment on the controversial conflict resolution system, the so-called Investment Court System (ICS), which is included in CETA.

Deputy Prime Minister Didier Reynders announced today that the court would ask for advice. The step follows from the resistance against CETA of the Walloon premier Paul Magnette, who has now resigned. He ratified the treaty last October, provided that the court ruled on the dispute settlement system between states and investors.

Critics, including leftist politicians, unions and environmental organizations, find that large companies in this system get too many opportunities to tackle governments legally.

CETA will take effect on September 21st. This applies in particular to the trade rules. Among other things, the ICS is not yet operational. This will only happen if all EU Member States have ratified CETA.

The Foodwatch, Environmental Affairs, Greenpeace and Transnational Institute organizations responded to the Belgian decision. 'We have also asked several times in the Netherlands for this test. It is very good that Belgium does so now, we threaten to get a treaty that we can not overlook the consequences. We therefore find it irresponsible that a large part of this treaty will take effect for two weeks in advance for our House of Representatives, 'said a spokesman on behalf of the organizations.