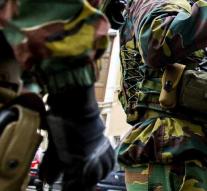 brussels - Belgium is making more soldiers available to the international coalition against IS at the request of the United States. From mid-May, more than a hundred soldiers will be deployed extra. That has been decided by the Council of Ministers.

There are now 43 Belgian soldiers present in Iraq. There they mainly work on the reconstruction and advice of the security services. The number is now increased to 80.

In addition, Belgians from an air base in Jordan, in turn with the Netherlands, deploy F-16s over Iraq and Syria against IS. Belgium is now sending some thirty soldiers to Erbil to improve the working and living conditions of the coalition troops at the airport.

'The fight against terrorism is and remains our priority. I am proud that we can increase our contribution to the International Coalition against IS ', according to Defense Minister Steven Vandeput.