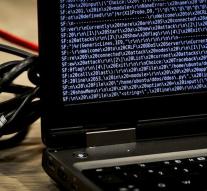 brussels - Belgium gets a 'cyberleger' with 200 experts to defend the country against digital attacks. This was confirmed by Minister of Defense Steven Vandeput. The computer experts are housed at the Belgian military intelligence service in Evere.

The recruitment has already started. Defense is looking for people who have knowledge of hacking and malware like viruses. They are further educated at a special NATO service in Estonia.

The cyberleger deals with defense of military targets such as weapon systems and communication. They must also be able to launch a counter attack in a cyber attack from abroad. According to Vandeput, this will always happen 'with respect for existing international treaties and the rules of law'.

Cyber ​​attacks are used, among other things, for business espionage, but also to influence elections. In 2013, it appeared that the British secret service broke Belgacom's user data from the Belgian telephone service.