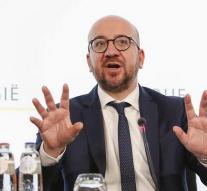 brussels - Belgian Prime Minister Charles Michel wants the British referendum on membership of the EU engagement for a conclave of EU leaders on the future of Europe.,, Of the British for or vote against the Brexit, there now is the momentum, 'he said Wednesday in Parliament.

According to the French-speaking liberal,, citizens have the feeling that Europe is constantly managing crises, not the future. 'EU leaders would have to commit to a number of specific policy issues, such as the internal energy, telecommunications, migration and internal and external security.,, The citizens lacking the perception that Europe has added value. However, that is indeed so. '

Is it still a Brexit, then Michel wants to negotiate as soon as possible with the British.,, We have to avoid a long period of uncertainty and instability. '