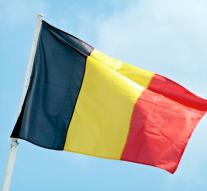 brussels - For the first time during the Belgian national holiday Thursday at City Hall on the Grand Place in Brussels projected the Belgian flag. The black-yellow-red to emphasize the unity of the Belgian people after all 'what the country experienced last year.'

'The capital is the glue between all Belgians and the showcase of our country,' said Councillor Els Ampe (Public Works). 'By shrouding the town hall in the tricolor, we emphasize our unity in diversity. 'This unity is especially important, says Ampe. Belgium still suffers from terrorist threats.

Thursday, the king takes on a traditional military parade. While the tanks will rumble on the Place des Palais, flying fighter jets over the salute. The mandatory day off, with celebrations across the country, will be closed in the capital with grand fireworks. This is the first time since the New Year fireworks were canceled due to the terrorist threat.


The additional security measures are screwed on in connection with the stop in Nice.