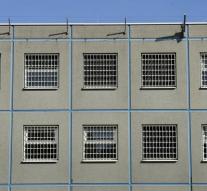 strasbourg - Belgium treats its detainees 'inhuman and degrading'. Therefore, the state has to pay two men a compensation of 3500 and 11.500 euros respectively, the European Court of Human Rights ruled on Tuesday.

The men complained about the conditions in the prisons of Vorst and Lantin. For example, one detainee had to divide his 9-square-meter cell in Vorst at the end of 2012 and the beginning of 2013 with two others, if he only had to fly for an hour and could only shower twice a week. Sheets, towels and clothes were changed once every three weeks. He is entitled to a compensation of 3500 euros.

The other man, who is stuck in Lantin since February 2015, has to go to the bathroom in the cell he shares with another. He is allowed to shower twice a week and the laundry is done once a month. There are no other activities so he's in the cell all the time. The state has to pay him 11 500 euros, according to the court.