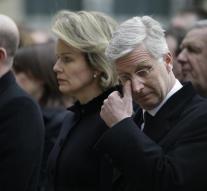 brussels - The Belgian King Philippe and Queen Mathilde again on Tuesday visited victims of the attacks in Brussels. Last week, they did even a few times.