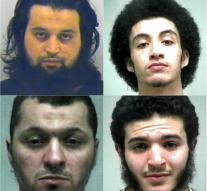 brussels - The Belgian Federal Police have an APB distributed for four members of Sharia4Belgium. The foursome is beginning convicted this year, but has long been a fugitive.

Hicham Chaib, according to the police one of the leading figures within Sharia4Belgium. He was the bodyguard and right hand Fouad Belkacem, the former leader of the terrorist group. Chaib is in Syria and fight there for Majlis Shura Al-Mujahidin.

Soufiane Mezroui was also an active member of Sharia4Belgium. He also traveled to Syria. He should fight the al Qaeda-affiliated Al-Nusra Front.

Said M'Nari is not known where he is. He was the treasurer of Sharia4Belgium. After Fouad Belkacem ended up in jail, he took over the managerial duties from him.

Azzedine Kbir Bounekoub was just like the other three members of Sharia4Belgium. He is also in Syria and fight like Mezroui for Al-Nusra Front. Kbir Bounekoub would have a leading role in this terrorist group.

All four wanted terrorists have been sentenced to terms of imprisonment of at least five years before the threat, inciting or preparing terrorist crimes. Why the police are investigating reports has spread to the four, was not disclosed.