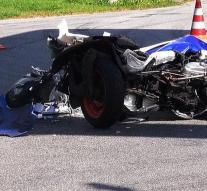 brussels - Motorists in Belgium driving off after an accident without notifying the police are heavily penalized in the future. The maximum penalty for a so-called hit and going from two to three years in prison if wounded, and from one to two years to only look damage.

That the ministers Koen Geens (Justice) and François Bellot (Mobility) announced Monday. The sanctions against drivers who are repeatedly caught driving without a license or be strengthened. Furthermore, it is an offense to drive away without notification if there is no damage to others.

In accidents in which people were injured or killed the perpetrator drove last year in one in ten cases. In total this happened 4396 times. If accidents only look damage are taken into account it went daily in 2015 to two hundred cases.