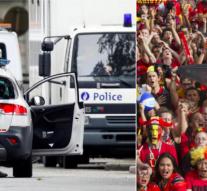 brussels - A twenty terror suspect would themselves have to blow Sunday during the European Championship match against Belgium Hungary, in a place where a lot of fans would follow the match on a big screen. That the French television station RTL reported on its website. Special anti-terrorist units of the Belgian police have the man arrested in the night from Friday to Saturday.

VTM News reported that a terror suspect has been arrested in Tournai. According to VTM News the defendants can not be linked to existing terrorism cases and there may be a new terrorist cell.

In Verviers in Liege police rolled a terrorist cell early last year. That group would have been led by Abdelhamid Abaaoud, who was involved in the terrorist attacks in Paris in November and shortly after was shot dead by French police.