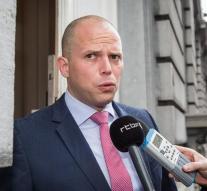 brussels - People staying without valid papers in Belgium can expect a fine of 200 euros. This applies not only to foreigners whose visa has expired, as well as EU citizens who do not have valid documents with them or do not register in time for church as they want to live in Belgium for more than three months.

The decision became official July 24. 'This measure is part of our fight against fraud and abuse, '' said a spokesman for Secretary Theo Francken (Asylum) Friday in the newspaper De Standaard.' We want to malicious files and flagrant abuse really tackle. Thus the French are sometimes settle here without signing in, to avoid certain taxes. ''

Offenders must immediately pay the fine.