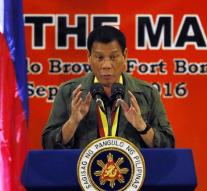 brussels - The Belgian trade mission to the Philippines in May 2017 is affected by the controversial statements of the Philippine president Rodrigo Duterte. Duterte said as US President Obama recently ' son of a whore '' and Friday he likened to Hitler himself.

According to Prime Minister Geert Bourgeois, Flanders has his government in front of the Federal Foreign Trade Agency already expressed reservations about the mission and ' seems to be a ministerial presence from Flanders on this mission not feasible. '

In the Walloon newspaper La Libre Belgique on Saturday also urges the Secretary of State for Foreign Trade of the Region of Brussels, Cécile Jodogne, to cancel the mission.