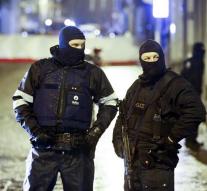 brussels - The Belgian police on Tuesday arrested eight people suspected of recruiting jihad fighters for the war in Syria. They would have provided financial support to terrorist group Islamic State.

In Antwerp, Bruges, Sint-Niklaas and the Brussels commune of Schaerbeek, the police in nine raids. Thereby not find any weapons or explosives.

The Belgian authorities reported Tuesday also arrested a 43-year-old man in connection with the attack on two police officers in Charleroi, last summer. He would have with which the perpetrator comes inhakte the machete on the female agents. Both of them were seriously injured. The attacker was shot dead on the spot.

Earlier, three people were arrested for involvement in attacks.