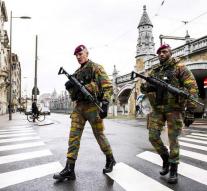 brussels - The deployment of 1,250 soldiers in the streets of Brussels in particular and other cities will be extended by one month. The Belgian government announced Friday. Threat Level 3, on a scale of 4, is maintained, so it was decided after a new threat analysis on 21 March.

Since the attacks on Zaventem airport and the metro station in Brussels Maalbeek defense puts on March 22, 2016 permanent troops to assist the police. Initially, she also secured potential targets such as embassies and synagogues stations, now they mainly patrolling in strategic places.

The number has since been phased out by 1800, partly after complaints from the army about the excessive workload. In addition, most soldiers find they perform are improper work with.