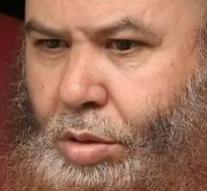 brussels - Belgium has withdrawn the residence permit of an eighteen-year-old Moroccan Dutch with an appeal to state security. 'We have enough indications of our security services that weigh the file heavily enough,' cites the newspaper The Last News State Secretary for Asylum and Migration Theo Francken.

It is the son of a controversial imam, Shay Alami Abu Hamza, who was banned by the Belgian authorities at the end of last year because he would encourage Muslim youths to become extremists. The salafic imam left for Morocco.

His son, according to Belgian media, is currently in a closed youth establishment. There he was sent by the court after he had called things in a movie last year, 'Oh Allah, destroy the hateful Christians. Kill them all. 'He offered his apologies later.

It is not known if the eighteen-year-old boy will be sent to the Netherlands when his father will go to Morocco.