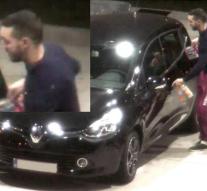 brussels - The Belgian and French police are searching for Mohamed Abrini, a thirty accomplice of the wanted terrorist Salah Abdeslam. That the Public Prosecutor in Brussels Tuesday.

Abrini was second on November 11, two days before the attack in Paris in the evening about seven o'clock filmed with Abdeslam in a gas station in the French town of Ressons on the motorway towards Paris. He sat behind the wheel of a Renault Clio which was used two days later in the attacks in the French capital.