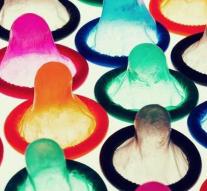 ghent - Residents of the Belgian Ghent can have their contraceptives such as condoms and the morning-after pill reimbursed by the municipality. Belgians who are financially short of cash can claim this.

'If people do not have the resources and do not want a pregnancy, it is important that they know where they can go. That is a right for everyone, even if it is financially difficult, 'says council member Els Roegers (N-VA).

The Ghent council of the OCMW, a social authority of the municipality of Ghent, has decided this week to extend the reimbursement of contraceptives. Ghent women could have been reimbursed for a while, an injection that has to be taken four times a year.

From now on, the same applies to condoms, the morning-after pill and other long-term contraception such as a diaphragm or sterilization. The decision comes at the suggestion of the Ghent N-VA. The CPAS has already been adjusting the costs of contraception, for example in Antwerp, for example.

'It is a way to prevent generation poverty, especially among children,' says psychologist and OCMW council member Els Roegiers (N-VA). 'If people do not have the resources and do not want a pregnancy, it is important that they know where they can go. That is a right for everyone, even for those who are financially difficult. '

'The choice lies with the woman or man himself', OCMW chairman Rudy Coddens (SP.A) points out. 'Obviously nothing is imposed on them. For example, a woman who already has three children and can not see a fourth, or a man who wants to be sterilized but has no means for it. '

The OCMW will not distribute condoms or people just put money into it. 'No, it does not work like that,' says Coddens. 'People should discuss this with a social worker or their doctor. Thereafter, a request for reimbursement must be submitted. Everything is negotiable, but there are approval procedures. '