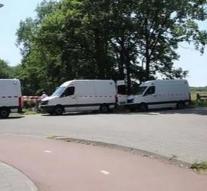 antwerp - A Belgian couple was arrested on Monday in connection with the murder of an Antwerp man whose body was found in a house in Roosendaal in June. That is what the Antwerp parquet says. The 62-year-old Frank Serruys would be strangled.

The suspects are a 36-year-old woman from Essen and her 34-year-old friend from Lokeren. According to the parquet they belong to the victim's circle of friends. The body of Serruys was found on the 14th of June in Turfvaartsestraat in Roosendaal. He would be killed the day before. There were also other traces of violence on his body.

After identification of the body, the Antwerp federal judicial police investigated the Dutch police. Further investigation revealed arrested suspects on Monday. There is nothing known about a motive.