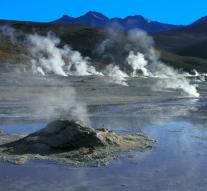 - A Belgian woman is perilous burned when she fell into a hot geyser in northern Chile . The 68 -year-old tourist wanted to take a picture of the natural phenomenon , when they fell into one of the El Tatio geysers. Therefore she has serious burns on 75 percent of her body increased , reports the Chilean newspaper La Tercera . Her husband suffered burns to his arms as he tried to save her.

The El Tatio geysers are located near the desert town of San Pedro de Atacama and are famous for the columns of boiling hot water and steam that they shoot each morning in the air.