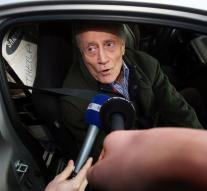 - The 82-year-old criminal Marcel H. of Belgium on Thursday came at large. Elderly gangster, who was sentenced in 2010 to fifteen years in prison for robbing a CIT in 1998, must wear an ankle bracelet.

two cash couriers arrived at the robbery in Waremme to, but before H. was not prosecuted. H. was also accused of leading a criminal organization., He was acquitted, however.

H.'s lawyer said earlier against Belgian media that the deepest desire of his client is to care for his sick wife. That may have played a role in the judgment of the sentencing court in Brussels to release him. H., also known as the godfather of the Mafia Liege, left the prison in the Walloon Nivelles Thursday morning.