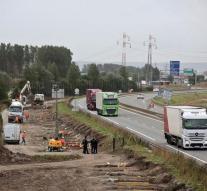 brussels - On three parking spaces along the Belgian motorway E40 towards the coast are private security guards stationed. They must ensure that there is no climbing migrants in trucks to England.

The measure to deter smugglers lasts a month and will start immediately, the Flemish minister decided ben weyts (Mobility) Friday. That should prevent trucks will park at breakdown lanes or ramps.

It will include the parking lots at Jabbeke and Mannekensvere, which in recent days, dozens of people were arrested undocumented. So huddled Tuesday at Jabbeke fifty people, including children, from the bushes looking for transport to the coast.

' The pressure on the West Flemish parking is clearly enormously, and safety on and around the car parks appears to be in jeopardy, '' the prosecutor in Bruges announced this week. The increase is related to the French announcement migrant camp canvases at Calais.