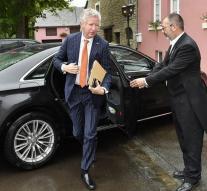 brussels - Belgian Prime Minister Charles Michel has summoned his Secretary of Commerce to stop a refresher course in the US to come do his job in the government. The 54-year-old Pieter De Crem is the Harvard Business School embarked on a course of six weeks 'to assess the economic and trade challenges even better that will affect us in the near future and steer.'

De Crem is not available in time for the parliament by the course and would also miss a trade mission to Japan. 'I can not. I have contacted De Crem and asked him to return, 'said the Prime Minister.

The function of the federal Secretary of State for Foreign Trade two years ago with the arrival of the government-Michel created, although Flanders, Wallonia and Brussels, there are self responsible for his and their own ministers. In the media, the Christian Democrat is therefore called mockingly 'officer for luxury travel.