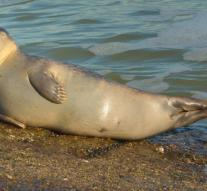 brussels - The first seal pontoon in Belgium is one week after the official opening at the bottom of the marina in the coastal town of Blankenberge. The resting place for seals continued last weekend stabbing at low tide in the mud and was filled with water.

The Flemish Minister ben weyts (Animal Welfare and Tourism), who opened the pontoon last week, represents 35 000 for a copy can not be fixed according hang him.

Last summer showed that seals it felt nice to get to a floating dredge pipe, but when dredging was done she had no place to rest in. A resident of Blankenberg suggested placing a pontoon. Weyts then gave to the mission work there, not only in terms of animal welfare, but also because of the ' tourist value. '