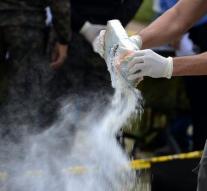 brussels - The Belgian customs has nearly 22 tons of cocaine seized this year, 36 percent more than in all of 2015. The record from 2012, when 18 tons was intercepted, is thereby broken.

According to the Ministry of Finance, the results are due in part to improved risk analysis and international cooperation. Especially much coke discoveries were made in the port of Antwerp.