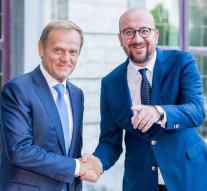 brussels - The informal EU summit without Britain in Bratislava in mid-September can be successful if the EU leaders,, give new impetus to the European project, which is urgently needed. 'That said Belgian Prime Minister Charles Michel Wednesday after a preliminary call Brussels 'EU President' Donald Tusk.

It is in Bratislava the first time EU leaders meet after the British referendum on EU membership. Now the British EU say they want action- the official steps have not been put before- the remaining 27 going to talk how they want together.

,, The current Europe gives the impression of being far from the concerns of the citizens and not be aware of their expectations, 'said Michel. The idea must have the old and new Member States opposing interests on the shovel. Social dumping, the practice of cheap, often East European workers are posted to another Member State, he said,, lethal for the European project. '