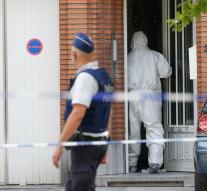 brussels - The Belgian police arrested four people on Wednesday evening during searches in response to the failed attack on Tuesday at the central station in Brussels. That has communicated the federal parquet.

The police conducted searches in the locations of Anderlecht, Koekelberg and Molenbeek, all in the region of Brussels. People searched for houses had regular contact with the deadly perpetrator, the Moroccan Oussama Zariouh. Two searches were held in Koekelberg.

All four detainees are being sent to the investigator on Thursday. Nothing is known about their identity.