Home / World / Belgian pigeon smugglers with hands in her 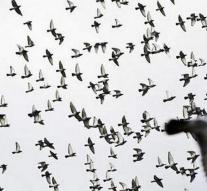 Only 2,470 of the 7 907 pigeons have been reported on the website of the National Pigeons Association KBDB. The pigeons are surprised by the tramontana, a fierce northern wind that suddenly heads the French Pyrenees and speeds can reach up to 180 kilometers per hour, know the pioneers.

Combined with temperatures above 30 degrees this has meant that many pigeons had to stop their flight.

In the pigeon sport, votes are being taken to remove such marathon flights due to the risks. At the same time, the games are very popular because there is a lot of money and fame.