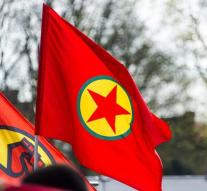 brussels - A major lawsuit in Belgium against members of the outlawed Kurdistan Workers' Party PKK seems to be shelved. The court on Thursday all defendants for trial in Brussels. The Public Prosecutor may still appeal this decision.

The prosecution wants 36 people and companies tried to see to participate in activities of a terrorist organization. The court, however, sees the Turkish-Kurdish conflict as an armed conflict in which the terrorism legislation can not apply.

In a large-scale action in 2010, the police picked up during raids on Kurdish institutions in Brussels, Dendermonde, Antwerp, Verviers, Namur, Leuven and Liège suspects. The investigation was begun in 2006 after the federal prosecutor had determined that the PKK in Belgium and other Western European countries widely Kurds were recruiting for training camps in Iraq and Greece. The Belgian OM suspects the organization away from manufacturing and selling false identity documents. She would also be guilty of extortion.