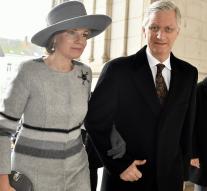 - King Philippe and Queen Mathilde are next Wednesday attended the commemoration of the attacks in Brussels. It is exactly a year since terrorists blew up at the airport in Zaventem and Maelbeek Metro Station in Brussels.

The commemoration ceremonies organized by the federal government, airport and public transport company STIB. The victims' families are closely involved.

Brussels Airport is 07 to 58 hours, the time of the attack, a minute silence observed. The subway station is done at 09. 11am. Later in the day is revealed near the metro station, close to the European institutions to Schuman, a work of art for all the victims of attacks.

The sculpture of Jean-Henri Compere measures approximately 20 by 2 meters and consists of two stainless steel plates curl up on one side. Brussels artist sees the monument a powerful gesture against violence, with room for hope and dialogue.